I've always thought that shoes for virtually immobile infants were a little silly. Though we were given several pairs as gifts for Jadon, he hardly ever wore them. When he did, I spent so much time re-positioning (and finding!) them that it really wasn't worth the effort. Jadon usually went barefoot at home, socks served him well going out during the winter months.

That was all fine and dandy while he was carried everywhere, and even when he started crawling. But then Jadon took his first steps at seven and a half months, and now wants to walk EVERYWHERE at eight months. With the whole summer in front of us, and lots of grass fields, pavement walkways, and wood chip playgrounds to explore, Jadon actually needs shoes now.

Soft-soled shoes are the recommended style for early walkers to promote proper foot development. Recently, I noticed the nice leather shoes of one of Jadon's buddies. I looked up prices online for similar shoes and couldn't believe the prices! Who wants to pay $15-$30 for new baby shoes? 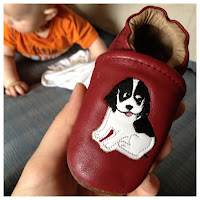 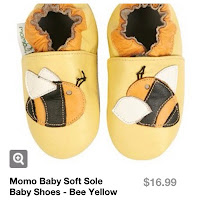 I started searching for used shoes in thrift stores, but always left empty-handed. They never had the right style or size I needed. Since young children grow so fast, I'm a fan of buying clothes and shoes a little big to get plenty of wear out of them. However, you can only go so big with shoes. New walkers are already tripping over their own two feet!

The next time I saw Jadon's friend, I took a closer look at how his shoes were made. 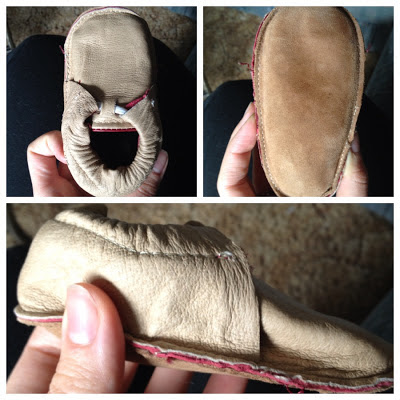 By flipping the shoe inside out, I could see that they were made out of only three simple pieces: a sole, a heal, and top. I set my sights on making a pair. 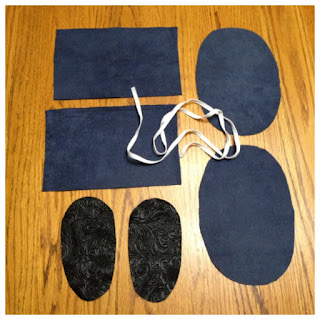 Above, you'll see the pieces that I needed. I chose to make these shoes out of a soft suede material because it's flexible, durable, and doesn't fray around the edges. The two rectangle pieces were used for the heals. The two large ovals were used for the tops. The two smaller, black ovals were cut for soles (but I ended up changing my mind and used the same blue suede). The white elastic was used to go around the ankle.

First, I folded the large oval piece in half and centered it on the "toes" of the sole (*note: for this step, the side of the sole you intend to touch the ground needs to face up). I sewed the edges together, which resulted in something resembling a slipper. 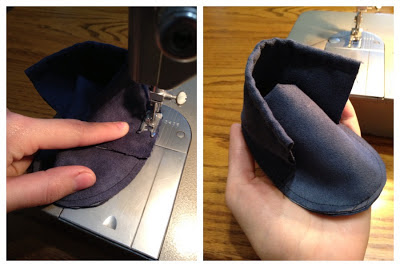 Next, I folded the rectangular piece in half and sewed a small seem about a half-inch from the crease (sorry, I forgot to take a picture of that step!). This seam created a tube for the elastic. The folded rectangular piece was then centered on the "heal" of the sole and sewn in place. Part of the rectangle should overlap the previously sewn "slipper." 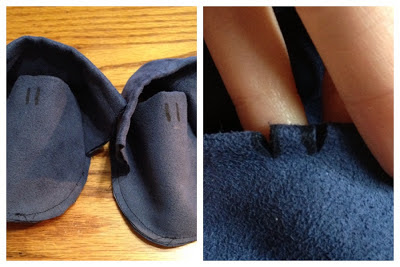 Since this suede doesn't fray, I could simply cut little slits in the top piece for the elastic to go through. 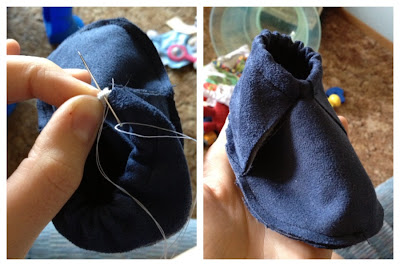 I then sewed the two ends of elastic to each other. Finally, I turned the shoe inside-out, and admired my work. 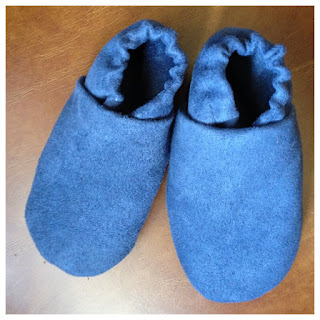 I loved how these turned out, but then discovered that they were too narrow for Jadon's extra-wide feet! I couldn't even slide them on his foot. When I actually measured how long his feet are, I found that they are almost five inches long. The shoe chart I referenced told me that this is the length of most 18-24 month kids' feet! No wonder Jadon walked so early. His feet are like snowshoes!


My second attempt at shoes for Jadon fit, but just barely. I ended up using the black soles that I ditched earlier for this pair. I tried to make them look like little TOMS.

I think I may have found a new sewing addiction in making baby shoes.
Email ThisBlogThis!Share to TwitterShare to FacebookShare to Pinterest